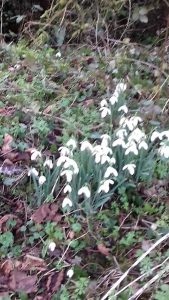 When did Valentine’s Day became an occasion when you knew who sent you the card, left the flowers on the doorstep or hid the chocolates in your desk drawer? Was it more romantic NOT to know? Part of me wants to say yes but at least if you are in a relationship, there is a chance you’ll get ONE card.

And what would happen if you were in a relationship and still got an anonymous card or present? Perhaps romantic notions of a mysterious admirer should be consigned to the bin of the past. It could come across as creepy. What about the feelings of the poor person who sends the card? Are they hoping you’ll find out? And if then, how likely will it be that you’ll be pleased. What if you reject them?  And what if it’s you that’s being rejected?

Dealing with and understanding rejection is an integral part of being a writer. Is it better to leave the manuscripts on a file? At least that way there is no possible chance of hurt feelings and the pain of another polite refusal.

I felt like that. Once. Not any more.  I enjoy rejections. Yes. You can read that again. I enjoy rejections. There’s always a reason for them and every time it happens, I re-read the story and think, Yeah, I agree. Reluctantly, because when I sent the manuscript off, I was certain it was the next blockbuster.

Recently I sent off the first three chapters of a novel to an agent and back it came with some positive comments and a polite rejection. As soon as I read the words, that niggling feeling I’d ignored for so long (and it wasn’t a big thing, just a suspicion, a hint that I was missing something) became fully formed. How hadn’t I spotted this before? The first three chapters needed reshaping to bring the true dilemma my main character faces to the forefront.

And a story that had already suffered two unsuccessful outings, was reshaped and won the Ely Amnesty International Prize. What was different? More hints than a distinct show, not tell. And an uncertain ending. It worked this time. So now when a rejection happens, it’s a call to review, rethink and remodel.

So this month, I’m reshaping the first five chapters of that rejected manuscript and reading it all the way through again with a more critical eye so that my main charater’s dilemma has more prominence.

And then? I’ll send it out again. To someone else.

After all, plenty of people have been rejected before and will again. And I’m not just talking about unwanted Valentines.

Why you should never give up

What happened to all those New Year Resolutions?

Be the first to know about new posts